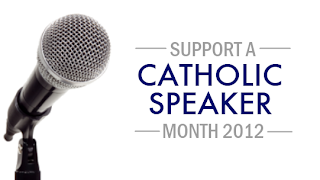 I was first exposed to the strong presence of Eduardo Verastegui in 2007 when watching the beautiful pro-life film Bella.  I remember being amazed by how he could convey so much with a single facial expression . . . a look in the eyes that held so much meaning.  Now that I think about it more, this expression, this look, was rooted in a deep commitment Eduardo had made in recent years: to do God's will rather than that of society.


After watching the movie, I remember visiting a comprehensive fan-made website and scrolling through photos taken at Medjorgorje and even one with our beloved Pope John Paul II not too long before his passing.  I became more curious about the man behind "José".  I learned how he had once been the stereotypical "Latino bad boy" and how his heart had changed through a re-affirming of his Catholic faith, inspiring him to instead promote a positive image of Latinos in film . . . and to advance positive media in general.  He vowed to only take roles that would glorify God, never those that would compromise his morals.  The more I learned, the more Eduardo Verastegui earned my admiration and respect.  As a result, I felt honored upon hearing that I would be blogging about him for Support a Catholic Speaker Month 2012 (http://brandonvogt.com/scsm12).

Although I unfortunately was unable to interview Eduardo Verastegui for this post, I have prepared a video that highlights the profound influence he has had as a role model for Catholics (and, truly, all people) in a less-than-moral world.  I have also included two videos at the end which emphasize his role as a pro-life speaker.  Please feel free to share this post with others.


The Story of Eduardo Verastegui
by The Little Rose


If you are having difficulty viewing my video or would prefer to see it in a larger format, please visit the youtube link at: http://www.youtube.com/watch?v=iSKF78XQjGs&feature=plcp .


Catholic Speaker Videos:
Eduardo Verastegui at the 2007 Celebration of Life (Parts 1 and 2)

In addition to his role in BELLA, Eduardo Verastegui plays Blessed Anacleto Gonzalez in FOR GREATER GLORY, a film that chronicles the religious persecution of Catholics in Mexico in the 1920s.

Pax Christi,
The Little Rose
Posted by Gina at 3:26 AM

Which video was your favorite (Catholic Video Week)? (Part 1)